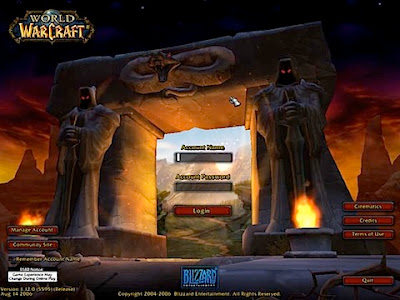 DISCLAIMER: As July 9th 2014, I have released the song on my Soundcloud- account. Listen it here!


You know, I´ve always wanted to do a cinematic montage myself.
Like the stuff which you hear on movies´ end credits, combinging the themes while hopping through different keys, tempos and feelings.

Or....ehm, that stuff you hear in an online game´s login screen. I wonder what game we could possibly talk about here?

So, one day at work I actually decided to go all nuts and started to improvise a bit with the themes, riffs and melodies of our upcoming album. And suddenly, I was having a blast...I had so much fun to do whatever I wished, playing "Kyyppari"´s main guitar riff with staccato strings and whatever I could just imagine of.
One thing lead into another, and suddenly I was having a 6- minute classical arrangement of the album´s various themes. Using only basic strings, I could easily mimick everything roughly to make some guidelines what to do. 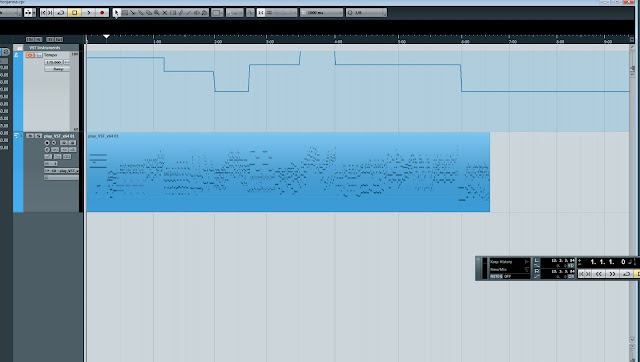 The fact that I still had my template left from the movie score I was doing last autumn helped me a lot. So I basically had all the instrument tracks and samples mapped already and was ready to start orchestrating right away. Which I did. Using EastWest Quantum Leap Symphonic Orchestra Gold (Seriously, I wonder if you could actually get a longer name for a piece of software? :D ) as the basic palette with some additional stuff from Native Instruments (Kontakt II library), Garritan (Personal Orchestra + Jazz& Big Band libraries) and Quantum Leap (RA library) it took me a couple of days to orchestrate the whole palette. 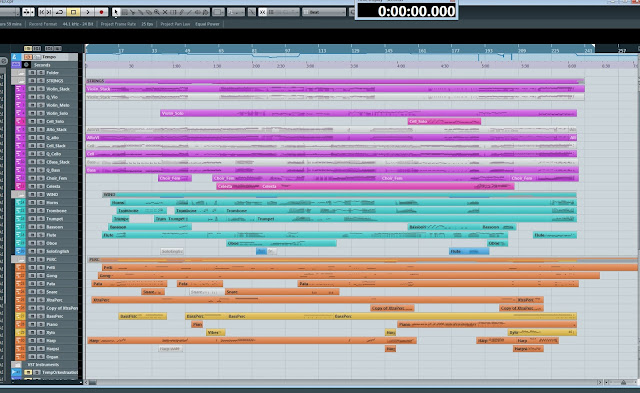 After I had carefully orchestrated the whole stuff with midi, I exported every instrument separately out from Cubase as wave file and opened my movie score´s mix template. As I was using the same sounds, I could just import the wave files to their own tracks and all the EQ´s, compressors and reverbs were right there.

[studio jargon]
Clearing all the previous automations, I was ready to start from scratch to give the volumes and pannings the treatment they should have. For you geeks out there, the final secret of creating real- sounding stuff is dynamics. In order to have room for compression for the sound in the final mix and master, you have to have dynamics so wide- ranged it sounds almost stupid. I´m using first a modulation wheel for articulating the sound to match the realism (as in, the sound changes depending on how hard you bow/ blow/ hit the instrument) and then I use volume automation as well to emphasize the crescendos and diminuendos even more. And then, when I import stuff to Cubase, I compress a bit each track separately and then do even MORE audio automation to the volumes. Then when the final master compression is set, it will even out nicely stuff without taking the dynamics away.
[/studio jargon] 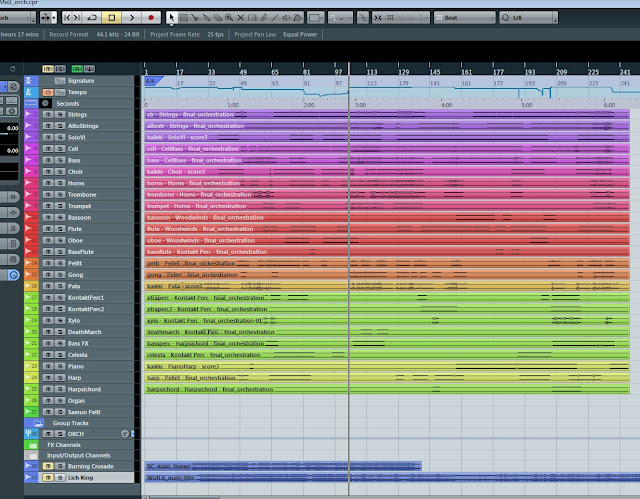 If you look closely, you may spot my mixing references on the last two tracks. :D Every track you see contains quite a load of "hidden" data, which is used for automating volumes, reverbs and even stereo panning, which is very important in mixing. On the top of this orchestral mix, there will be quite a load of more synthetic sounds, real percussion, real singing and some instruments as well, so we´re still quite far from the actual finalized product.

I was thinking of doubling all the choirs myself, using some clever technology even to do the female choirs (no, not harmonizer, thank you :D ) but then my good friend Jakke from Crimfall exploded my mind by hinting on this one new choir sample- package which is now out. And after listening the samples, I was already writing an email to my boss, giving him good reasons why we should definitely buy this package to my work tools arsenal.
Then I realized that it needs the newest version of Kontakt sampler, and I was lagging two versions behind. :( Luckily, I noticed that the upgrade from my version to the latest was only 100 € ("only" is really "only", as these things tend to cost close to 500 € normally...not very cheap hobby this is, hehe) so I bought it myself right away. Thank the Gods for Mastercard!

I should be getting my upgrade package next week (43 GB of samples, not bad ^^) and as the Gods were on my side, my boss just agreed on buying the choir package, which should arrive at that point as well.  I can´tlet this one go finished without those MASSIVELY SUPER- SOUNDING choirs.
And no, I wasn´t paid for advertising. :D
I´ll keep you two readers updated on this little project. You WILL hear it at some point. If nothing else, I´ll upload it to Youtube or something. Even I have my ego to boost sometimes. :D

Posted by Finntroll at 1:52 PM