Digital Chocolate: This was my life

In summer 2004 I remember talking to a graphics artist at Spinefarm Records. He mentioned me that he knows a friend in a Finnish mobile game company who might be looking for an "audio guy". I was nervous and inexperienced with formal jobs, so for my own surprise I was invited for an interview after sending an application with some music. Being mostly thinking I´d never get the job anyway, we headed to northern Finland to mix Verisäkeet with Moonsorrow. I didn´t bother myself with futile hopes- until right in the middle of the mixing I got a surprising phonecall from them in where they told I was hired. I started working there in October 2004 and stayed until April 2013. 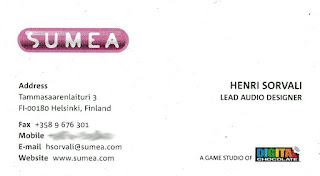 Many times I´ve been asked about why I don´t tour with my own bands I´m otherwise very active with. Having a steady job and kids are also very good reasons behind it, but as I had made my decision before I got either, it´s not the sole scapegoat. The real issue behind not seeing me on tours is because I have suffered from depression since the late 90´s and cannot contribute to longer trips due to that. During the years I´ve learn to recognize it, handle it better and accept it´s presence in normal circumstances, but for that I need a "stable" life more than your Average Joe. In order to keep myself in control, being on the road is the worst possible poison.

A part of me is always saddened about knowing my own band is playing our songs without me and I have felt like an asshat many times for not appreciating this awesome possibility life has given me. But I can´t make music either if I´m in a mental hospital and to prevent that happening, I stopped the things that would lead into that instead- so I could continue making that music with my best friends in the future, too.

I started touring in 1998. I had done some casual gig- trips before, but sleeping in a tourbus was a completely new experience for me at the time. I was 20, didn´t have any obligations to anyone except for loose studying and didn´t want to spend time at my lonely flat. I was depressed, broke, and craved for something to do instead of watching the walls collapsing on me. So when I was offered a live keyboardist´s job from a constantly touring Finnish pop/ rock band I didn´t hesitate for a second.
I knew the people in the band vaguely, but we didn´t exactly be close friends. They were hyped teenage idols who acted accordingly... while I was a chubby guy in a Marduk- shirt. I had never felt more like an outsider in my life, but at least it was a better job than handing out newspapers in the mornings. I performed my duties each night with professionality, but the more I spent time on the road the more depressed and introvert I became. When I got home from the gigs, I basically either stayed in bed or went to see any real friends possible- usually consuming large amounts of alcohol and metal music with them. When my assignment with the band ended at early 2000, I was a mental and physical wreckage and the depression had got way worse. I couldn´t study anymore properly. I couldn´t clean my home. I didn´t bother to clean my home. I played video games, consumed music and ate fast food. I only went outside if I had to. I didn´t even realize I was having a depression- I thought it was just normal to feel this miserable all the time. You know, black metal and stuff.

Fast- forwarding into 2001, things were looking a bit better. I had met my girlfriend a year earlier and lived with her, Finntroll was getting gigs abroad and I was actually enthusiastic about touring with my own band and own friends. But two years later, everything started to feel more like a funeral march again and mentally each trip felt consecutively harder to start and to recuperate from. I felt I was being slowly strangled each moment I spent on the road and someone had tied my guts into a knot three days before each departure from home. I just wanted to crawl somewhere and die, and I realized it was not because of the people I travelled with, but because of myself.
While I could manage to keep the depression somehow in control at home with various results, it was impossible after the first days on the road. I just needed much more of those "normal surroundings" to survive the unnormal ones. The doctors recommended medication a couple of times and I even tried it for a month but I turned it eventually down. I was actually quitting Finntroll due to this all, but the other guys convinced me that another live member could replace me on stage. I withdrew myself from all live performances and most social contexts in 2005 and stayed home as much as I could to tip that balance better. However, in spring 2006 that"normal" life started to collapse under my feet due to circumstances not entirely depending on me. Hävitetty was composed at the time, which probably depicts my feelings much better than any words and my girlfriend left me that summer.

Curiously enough, that shock and the aftermath was a turnpoint for my depression, changing it later into a more driving force instead of a paralyzing one. I spent over a year without doing practically any band- activities, trying to patch my abruptly shattered life together and concentrate on my son´s and my own future instead. Due to a lot of thinking and studying, I learned to understand my thoughts and actions better, and realized how to spot the symptoms of depression early enough to rationalize them down or trying to convert them into something creative instead- be it composing music, writing or even drawing. That year later I felt like I had found my own tools to fight and weapons to silence the Demons for most of the time- sometimes even making them work for me. And when least expecting it- met my clearly-meant-to-be-wife afterwards. As my life had begun to rebuild itself in the process, I hadn´t felt better in years.

7 years later, I´m still struggling with depression time to time. This destructive part will always continue living inside me, but I feel I am much more in control of it that I used to be. But I can´t go touring with my best friends because I WILL lose that control. I´ve tried it a couple of times and it didn´t exactly go "by the book". Unless you prefer The Call of Cthulhu, of course.
Even at home, sometimes it keeps strangling me for weeks or even months but I know I´ll eventually survive: escaping into my own worlds and surroundings meanwhile is a precaution for me not to lose it or be a monster to the people who deserve it the least. I just need to stay away from the things that cause this as much as possible, and touring is proven to be toxic in my case.
Having been seeing emotions within the audience ranging from sheer enthusiastic berserking into just standing there and crying, I am painfully aware how my music has given people moments every artist would kill to witness personally- and I miss that. I miss that a lot. My choice of dropping out from the stage wasn´t that much of a choice than a necessity- and given the life I live now going back there is also much harder than ten years ago. But whenever I occasionally join the stage, you can be sure I appreciate the situation as much as I appreciate the people coming to see us and showing me that the choices I have made have still given them the moments I live to create.

It took me six months to finish this text and it was the hardest thing I´ve ever written in my life. The more I went back in time writing it, the more I realized there are still a lot of things I need to work with as of today. Despite of the eternal ongoing battles inside my head, I am still alive even in the days I wouldn´t necessarily want to be. And the biggest thanks for that goes to my wonderful wife, who has been there for me all the time- especially in the days I certainly wouldn´t deserve it.

I will never be something one would refer as "normal". The melancholic and gloomy thoughts, anxiety, the feeling of being an outsider and the longing for some dimension else will always be there but due to my family, friends and meaningful work I find so much joy in my life that I can live with it. I will find my peace when I´m dead....and quite likely I´d find it dull as hell within the next two hours anyway. Meanwhile, I´ll stick around and try to make the best out of this all without that touring! And yeah, finish that Moonsorrow album on time.