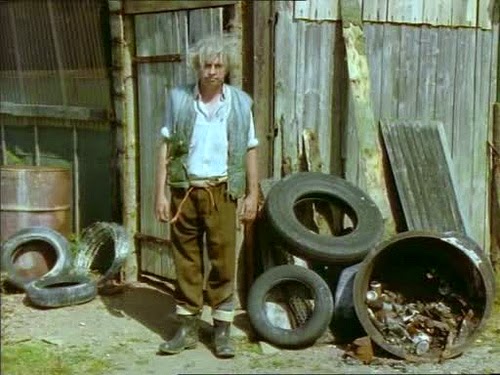 I have a couple of unfinished posts coming up, but meanwhile here´s something which might interest you while waiting. Did you know that we used to make a fanzine back in the 90´s with Ville and some other dudes? We used to publish our personal playlists there (while mocking each other for their bad taste of music), and I later continued it online in my personal homepage and in a couple of web forums. As I´ve not done it since 2006 or so, I´ve been thinking for some time to revitalize this utterly boring tradition to people who couldn´t care less.


So, here we go: Trollhorn´s playlist and recommendations for December/January 2015!

I find this band, and especially this album to be an excellent example of withstanding time rather well, which is why I´ve been listening it again lately. The music has a great balance between a "serious" approach and a "piss on everything"- attitude and for all the kvlt hype surrounding mr. Gaahl, this album actually has something to back it up a bit. The vocals are one the greatest reasons to spin this disk again and again, being massively otherworldly and varied throughout the whole experience.

I got introduced to Aosoth a couple of years ago, and have been listening to their albums quite much since. Very chaotic (yet structured and organized) and dissonant songwriting with downtuned guitars in black metal is rather interesting concept and their albums seem to have a very strong aura drawing me to pick them up more often from the shelf I intend to. Don´t close your eyes while listening to this or you´ll end up staying there.

Medieval classical music meets progressive rock? Yes, please! I got a tip on this band from a comment in this blog last year, and am very grateful for that as the music was even more awesome I could had imagined. The musicianship and arrangements are absolutely top-of-the-notch and a must to check for everyone into medieval music and old progressive rock.

I love Steve Roach and have a soft spot in my heart for any meditative music, so when you have stopped laughing at this new age- thingie for a moment, take a look at this with a more serious expression. This brilliant album, besides being all great meditative and hypnotic music, has also an interesting addition: so- called "Hemi- Sync" which is suppposed to stimulate and synchronize brainwaves using binaural music technology as it´s advantage. Not that I find much more than plain stereo spreading on everything instead of any pseudoscientific audio processing here, but nevertheless it´s hypnotic and minimalistic just in the way I like to soothe my brain with.

I just love how this album reeks of the 90´s in all aspects. But what I like in this album the most is the weird, almost magical and somehow even pseudo- occult touch that is somehow lurking in the background all the time. Then again, at parts it sounds like it was composed into a skin- treatment commercial. And even though I know categorizing music into genres is rather futile and embarrassing at it´s worst, I have huge troubles to decide what this particular music style represents. Electronic rock? Electro- Kraut? Synthrock? Just check out the damn album, ok?

Shitty vocals? Check. Bad drum machine? Check. Horrible melodies? Check. Only one, half an hour song? Definitely check. I really have no idea why I like this album so much. In all truth, I should probably hate it. But I dug it up from my hazy memories left in 1997 or so, gave it a listen and weirdly got attracted to it this time. Maybe it´s part of the fact that this type of music is rather rare these days and it contains many of the elements I like in my black metal? Not definitely an album I´d take to a deserted island with me, but I´ve still found myself listening many times during the evenings lately.

BUT HOW CAN YOU LISTEN TO SATANIC WARMASTER BECAUSE....uhm, yeah, fuck you too. One of the most creative and talented metal composers in Finland, SW´s newest offering is actually sporting a very good sound this time, which might even scare the most puritan dictation-machine- lovers away. Representing the sharpest songwriting in his career to the date as well and including a Vornat- cover (infernal hails!) this is a must- check for people into more old school BM but with a rather modern sound. There aren´t many -if all- weak moments on this one...well, except for the last song which got ruined by some fat asswipe called Trollhorn, whoever that is.

It´s crushing. It´s heavy. It´s occult. It´s evil. It´s DEATH METAL, in it´s literal meaning. The second full- lenght of LiR is a step from more traditional death metal into more blacker and occult grounds- meaning lenghtier and less technical songs, tons of uncommon instruments and soundscapes... and a heavy load or religious imagery. The artwork in itself is already worth checking out in it´s all detail.

When all the cool band names had already been taken, It and friends settled for no compromises! Despite of the rather eye- catching name though, the music is just the way I like it- black metal with doom- influences. The clever guitar harmonies everywhere deserve an extra credit here as well, and while Paradise Lost was once a rather entertaining band I´m sure Opth....Oth...Phot...salami have been spinning a disk or two of their early works before creating this album. Too bad they went all too gothic afterwards.

As mentioned earlier, if you speed and pitch this up for 30%, you get a hidden Primordial album. While I´m not particularly a great fan of Primordial myself (hi guys :D), this album made me a fan of Urfaust. Not right away, though- I had to listen to it a couple of times to get rid of the "Primordial on Ritalin"- effect, but I´m glad I gave it a chance because it hit me like a truck after some repeats. Definitely worth checking out!

I can already taste an upcoming side- project of Varathron and Zemial members in my mouth. And as a bonus if you actually read thus far: here´s my playlist from late 1998, straightout scanned from Meathooked #2! 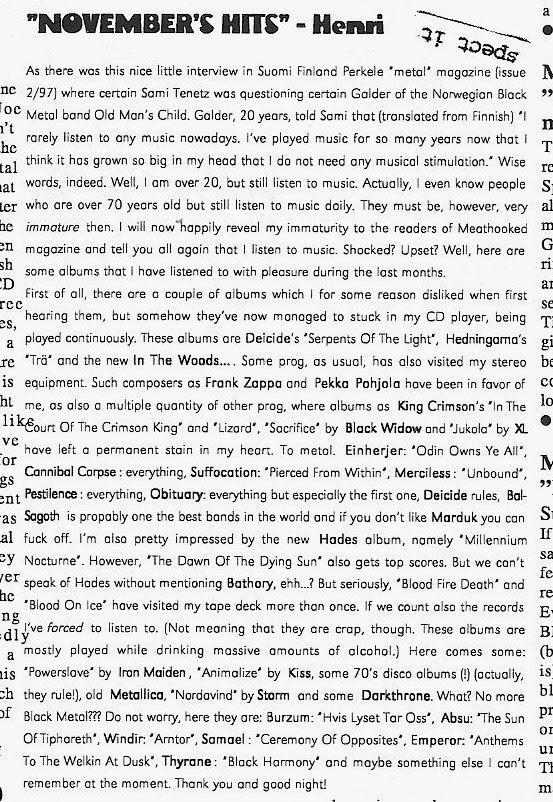