The plot is thickening.

Today´s agenda is all about keeping your shit together, a.k.a organizing. Running a band isn´t actually that far from running a business, believe it or not. Money aside, though- you don´t get anything reasonable out from this unless you run a record company, promotion agency or management. Ironic, isn´t it? However, when you´re preparing for an album it´s extremely important that you know exactly "what, when, where and why" you´re doing stuff.

In the above- placed Excel- sheet- snippet you can see how it goes in the Camp Finntroll. From left to right the rows go as following:

This following example keeps us perfectly on track on stuff we have done and what is yet to be done. As you can see, there are some songs which don´t have duration or music marked- that means they are to be done but not ready yet. Production- wise, it´s very important to see what´s going on all the time and what are the key points to concentrate on within the next milestone. With this, we can see that e.g. "Halkodisko" is completely composed, rehearsed and we also have lyrics for it too. That means we can put that song completely on hold for now and concentrate on the missing X´s.
So, I see we´re missing lyrics for "Lolbster". Email Katla and ask him about them. No rehearsal tapes for "Kyyppari" yet? Do them, and then delegate Beast Dominator to arrange the actual rehearsals for the upcoming week. Keep this in shared Dropbox/ Google Drive so everyone has access for it all the time. Which reminds me, gotta upload the rehearsal files there too.

I kinda like this organizing and during the last eight years at my work in this game house I´ve adapted quite a lot of production/organizing methods to my band- related hobbies as well. In theory, if we were indeed a games company....

This reminds me, I actually got some real work to do. Tundra is coming after work hours to help  me with Nexro, which might be that opening track I´ve been trying to figure out. 7 weeks left before the studio starts, 75% of the material ready. With a bandmembers and material like this, we´d be fucking majorly screwed if there wasn´t schedules, shared Excel- sheets, emails and telephone communication.

PS: Even though I´m goddamn excited about this new album, my only wish was that Blizzard would had delayed the release of Mists of Pandaria until December but apparently "don´t release it yet, we have a Finntroll -album to do before that" wasn´t a good reason enough. Bollocks!


First rehearsals went like a blast. Today we´ll figure out some more songs. But first, do you know how we actually prepare for rehearsals? Gone are the days when you showed someone "this riff goes like this": today we´re using way more advanced technology than back in the days. "What is that technology, mr. Trollhorn", you say? Well, you didn´t say. In fact, you probably wouldn´t give a rat´s ass about it. Nevertheless, I´ll tell it to you anyway.

REHEARSALS TAPES OF THE SPACE AGE

So, I make rehearsal "tapes" to people. How? Why?  Let´s concentrate on the "why" first.
Because of time limitations mostly. With this method, we will save shitloads of time as everyone can check out what to play beforehand, and we only go to rehearsals to practice and tweak stuff together, not using half of the time showing people how to play their parts. This also gives people opportunity to....

a) ...doublecheck stuff, a.k.a "how did that part go, shit, I cannot remember and I can´t reach that composer by phone now when I have finally time to start rehearsing"
b) ...take the songs piece by piece. You don´t have to spend two hours in a row while you can do 15 minutes now and 30 minutes tomorrow. Or just play it in the background while driving your car in order to "brainwash" your memory.
c) ...not waste time arranging hook- ups at the other side of the city while you´re hands full of something else right now. We all have our personal lives too, so it´s pretty fucking convenient this way.
d) ...email stuff. Seriously, just how great invention email is for musicians? I could kiss the one who invented attachements. Smack!

You might, at this point, know that I use software for demo recording. Cubase 6 in particular, with tons of plugins, romplers and samplers. Mind you, all bough and paid for. If you earn money while using someone else´s creations to do it, you DO NOT STEAL THAT CREATION. Keep that in mind.

So, let´s continue. Now we have a Cubase project open with everything up what you hear in the demos. For starters, I fix all usual playing mistakes I have done for those tracks. Trust me, there are always some. That combined with some magical copy/paste and people should be hearing riffs sounding exactly the same all the time when they re-appear. My arranging style contains quite a load of variations, so I have to make sure that a random bum note every here and there doesn´t accidentally get counted as a "variation", and I´ll hear someone faithfully repeating my playing mistakes at the rehearsals because "this was how you played it". :D
As I use plugins for guitars, there´s a neat trick I use: Distortion is turned way down, so the player can hear more clearly what to play. Another very good upside using plugins in demos!
On the top of that, I usually tend to compress and EQ "that particular instrument" in a way you can actually spot everything even better as I don´t have to care about the overall sound in the mix at that point.After that, let´s mute stuff people don´t need. Vocals, out. Most of the keys, out. Drums: Lower the volume of cymbals and put some top end to both kick drum and snare. Why? Because the drums are being used as a quiet metronome only and the top end from kick and snare will punch out nicely from the demomix still, even though the drums will be very low in the mix.

At this point we should have something that is easy to pick up. But that´s not all! I use standard EADGBE- tuning while the band doesn´t. So, something I actually learned with these sessions by a mistake ( :D ) is that if I then take the file to Sound Forge and pitch it there into D- tuning (DGCFAD) but do not touch the duration, the guys will hear basically 10-15% slower version of their rehearsal "tape" too! Now just how awesome is that? You can actually start listening to your personal part with an audible tone, played slower than usually!

And of course, I notice two hours before the rehearsals that I had accidentally sent some people unpitched versions of the songs. Which means that while the rest of the band plays the song from F#, Routa has practiced it from G#.

I wonder if the good old pen´n´paper method still has it´s advantages.


I remember when we were doing Midnattens Widunder, Katla used to play Motörhead´s "I´m so Bad (Baby I don´t Care)" every single morning. Those mornings weren´t exactly very pleasant, waking up from a floor of a horribly filthy 25 m2 flat with five other people. Smelling your own and their farts, banging the bathroom door, begging Somnium to get out from the toilet so you wouldn´t have to piss into a soda bottle. Then we walked two kilometres to the studio where we drank coffee and waited someone to play his parts so we could do something else than drinking that bad coffee.

Someone found a ketchup- bottle which had expired a year ago and we used it on our food. We didn´t have any money to buy new ketchup to use with our plain macaroni, so we had to take that risk. If I remember right, no- one actually got sick. But for some reason, we always had some money for alcohol. Except for when we went to local Black Metal guys´ rehearsal place to drink some homebrewn stuff. Was Sotajumala already formed at that point? I´m not really sure.


One thing though, that never seems to change is how I get my inspiration. I don´t. It gets me.
My "PERR....rrrrr*grunt*....KELE.....*grunt*" was maybe a bit too harsh when I bounced up from my bed 2:20 AM, as my wife almost bounced up too, but only because I had woken her up with my swearing. 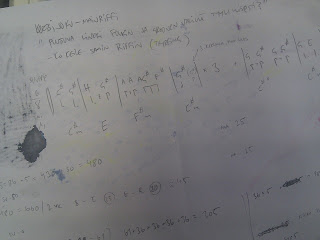 Using the other side of my son´s drawing sketch from the afternoon, I quickly scribbled notes and guidelines for that Most Awesome Chorus (tm) I had just invented (or force- fed, depends on your point of view). It´s supposed to be a perfect match for Tundra´s Most Awesome Main Riff (tm) and when I got back to bed I had already figured out how 75% of the song would go with an extra riff I had invented while I wrote down the other.

This is the best part in writing music. Nothing beats the feeling of IGOTTAWRITETHISDOWNFAST which hits you like a truck while you least expect it. And usually, these tend to be the best ideas done. You know, those ideas what you don´t think. You just know what to do.

Or rather, are being told.

We have our first rehearsal tomorrow for the new stuff. Let´s see how this goes!