Frankenstein´s Mixing Facilities speaking, how may I help you?


EDIT:I AM ONLINE WITH THE MIXING SERVICE! 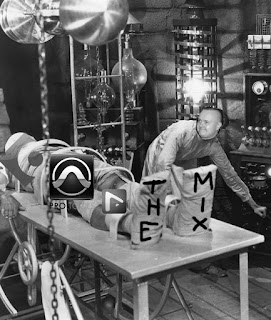 I´ve always loved mixing. To shape the sound into more suitable for my vision of the whole package, to practice making something too good first in order to destroy it later and to help the music finally coming alive in the best possible way. For any composer and producer, knowing how to mix is a great addition to your toolbox- and as a producer it´s almost near vital knowledge.


For me, it´s my absolute favourite part of the whole process to pull the lever in that storm and see my creation finally arise. Just like in any creative form of mastery, you can never be “finished” with your studies and practices. There´s always things to learn, new techniques to try out and the endless set of rules to break.

WAIT, I THOUGHT YOU WERE JUST A MUSICIAN?

Not really. I got myself a 4- track cassette recorder in spring 1994 after a couple of years of begging. My stepfather used to be a sound engineer and he taught me the basics of recording- and the rest was me fiddling around with one cheap microphone from the 70´s and various instruments, mostly at my parent´s garage. Fast- forwarding into the year 2000, I had got myself a computer with audio software and recorded now usually everything in my own flat. Which was very inconvenient and lacked all possibilities to make noise louder than an acoustic guitar. So I went crawling back to my parents after some years, asking if they would still have some room left in a corner of that garage.


In 2004 I had saved some money from band- activities to build a modest home studio there. Sometimes I brought friends to record their demos in the weekends as I could now record even drums (which I had bought from Marko of Moonsorrow and I still have!) and vocals.
I didn´t have great gear at all, but it was still better than rehearsal recordings for most people. Because of small underground circles, the word spreaded fast about me being enthusiastic on these things and during 2004-2008 I ended up recording and mixing couple of dozen of different projects, pre- production demos and even some albums (for the albums we actually used a proper, now sadly defunct studio my friend owned and rented). Usually they didn´t sound that good as I was still learning, but at least nobody complained, haha! When I got myself a job as a composer/ music producer at Digital Chocolate, these projects started gradually dropping due to my lack of time. And ironically, I also got a lot better afterwards.

I finally emptied the garage in 2008 and moved all my gear to the Dchoc office to continue using them at work. When I started working at Rovio in 2013 they provided me most of the equipment so I carried all my stuff to our new home and built myself a studio room there, spending now most of my time trying to shoo my kids away instead of actually working.

On game music mixing, I usually need to be very smooth. No disturbing elements unless especially needed, a pleasant EQ treatment everywhere and rarely any tomwaits- esque percussion mixes either. Everything needs to sit tight, shut up and be nice. As modern game music is usually a combination of orchestral instruments and synthetic, sampled or real instruments we´re mostly obliged to play with the set rules for good reasons. While in metal music it´s completely possible to crank the bass guitar too loud from “normal” and bury the drums under a reverb sized of a mountain, typical game music mixing is unfortunately much more strict and set in stone because it´s one the genres which usually suffers from more experimental mixing. Generally, you want to fit the music in a game into it´s own pre- defined pocket which is there to enhance the gaming experience. If you step out of that pocket too much, you´ll just ruin the experience. Sometimes it´s needed though- usually not.

(Please also note that I´m talking ONLY about mixing. Composing, arranging and producing are completely different from this stage and they indeed leave a lot of room to experiment.) 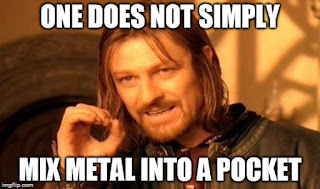 Metal, on the other hand, is supposed to be ruining everything. Or at least your neighbours´ and parents´ day. It´s dangerous and unpleasant. Powerful, disturbing, yet somehow clear and constructed from elements which combined make a package full of classical music´s best qualities turned on 11. You can´t fit metal into that pre- defined pocket or it kicks and bites itself out from it. Metal is freedom, anarchy and spitting on conventionality. One does not simply mix metal into that pocket.
While I welcome many of the possibilities the modern production tools bring, I tend to mix my metal in a more chaotic way. You know, the way it was supposed to sound like until studio Fredman and their friends killed it, making people think that this is how the genre should sound like. A metal mix doesn´t mean it´s supposed to be a lifeless tube of bass frequencies and distortion spreaded artificially three meters out from your loudspeakers with drums like a sewing machine. Of course I can align and quantize drums, tune all vocals and use triggers on everything percussive. Strip away all the non- conforming frequencies and finish the whole thing by making sure no transient in any track will ever exceed certain limit to make everything tighter than yours truly wearing a pair of speedos. And it wouldn´t probably sound as “good” as Fredman anyway. But I feel that a big part of the actual metal sound comes from the imperfection and those things should be used absolutely only when needed. Unless your drummer sucks so bad I have to use only triggers. Then I´ll just blame you instead.

If I haven´t pointed it enough in these rantings of mine earlier, immersion is what really makes me tick. When I mix game music, I make sure the sound is serving the situation the best possible way with reverbs, EQ´s and everything you can imagine. And when I mix a Moonsorrow album, I really want the soundscapes to match the setting we´re trying to create as much as possible. With every musical style, it´s always important to give the mix what the music needs, but I dare to claim that game music and metal might be the two genres which really benefit (and need) that extra level of immersion. Feel free to prove me wrong, though!
Sometimes, the immersion can be achieved by creating something which gives you an impression of that music really being playing somewhere. In game and film music, it´s called “source music”, which means that it´s supposed to actually be heard by the protagonist, to make it really feel you´re there. For that, the carefully mixed (usually more contemporary) music gets another round of editing, making it sound more like it´s coming, say, from the nearby night club you´re approaching.
Or sometimes, it can be something completely different. Switching to metal again- Remember that H&M- spoof we did a year ago? That Lany- song for sure isn´t done in a rehearsal room somewhere in France, but at my work using Cubase during one boring afternoon. Like all those songs in that little campaign, everything was created immersion first in mind. 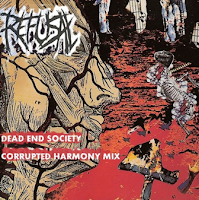 It shouldn´t be a surprise on that matter that I also love mimicking production styles and sounds. Sometimes I take a reference and try to get as near to it as possible, starting from (emulated) gear used into the tiniest things happening in whatever side- chain compressors. Remember that H&M- thing again? Yeah. That. Or this. I love to copy and mimic stuff for fun and challenge.
Besides, they just don´t do mixes like that anymore. There´s something in that imperfection and overall clumsiness trying to be as good as possible which makes me love it. That, or it´s just the Pytten- syndrome again.

(And to be honest, my perversion for mimicking might actually a very big reason I am now doing music for my living, because I got my first real job in the industry in 2003 when I happened to make a spoof from a right band at the right time, heard by the right person- but that´s another story I won´t bore you with today, hah!)


...WHICH IS WHY IT´S TIME TO KNOCK THEM BOOTS TOGETHER AGAIN.

During 2008- 2015 I have mostly concentrated on mixing game music, but sometimes when I have been asked and had time, I´ve gladly taken some mixing (and sometimes mastering) gigs from my friends´ bands just to have some fun. While I love my “professional” job as a composer and producer, there are always things I am not able to do in that area due to the fact that most game companies don´t use extreme metal on their game soundtracks. To keep my mind sharp, brain balanced and to satisfy my inner bad-behaving-necrosatanic-bulletbelt child, I need to work with metal music as well every now and then to preserve that natural balance.

After returning from mixing “Jumalten Aika” in late 2015 I felt like meeting an old friend I hadn´t seen for a long time and a couple of weeks later I found myself updating my audio computer and it´s software with a bit more in mind than just regular game music production I first intended. When everything was set up, I found myself going through my old mixes, looking for things to use for continuing practicing from where I had left off years earlier in that garage.
Working over two months almost every night with different projects to mix (luckily I have quite many musician friends who were willing to share their raw tracks for private remixing) I spent over 100 hours updating my skills, comparing my mixes to released albums, trying out different plugins to find what I need...and starting from scratch again if I felt it´s not sounding good until it sounded.
I tried different production styles for the same songs, and worked from metalcore to deathgrind and black metal to find out their nowadays typical sound processing tricks and repeated them until I felt ready to break those unwritten rules, only to mix them again with my own. And finally, I felt like I have the confidence to continue to the next step. 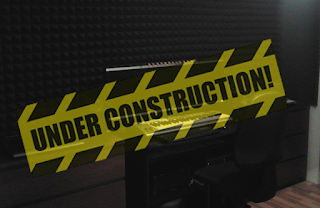 In March 2016 when I´m writing this, I´ve finally come to a decision to somehow revive my old semi- serious hobby of mixing and producing metal music. While I won´t be doing any recording for now, I will open a small- scale mixing and mastering service for bands soon for fun and keeping my skills in order. I won´t be planning doing any albums or bigger projects due to the commitment it demands, but bands needing for a proper treatment for their demos and even EP´s are more than welcome to get in touch with me in the future.

The next thing on my list before that is to replace that wobbly computer stand with a proper studio desk with room for some hardware racks, mount my new pair of huge- ass studio monitors up and then it´s time to make some use of them. I will make this more official when I´ve finished the renevation of the studio room, but you heard it here first!
Posted by Unknown at 12:51 PM 7 comments: